The longest day: JNCIE-SP attempt no. 1

On a Tuesday, December 13 2016, after about 3 hours of sleep I woke up just before 5:30 AM. After a quick breakfast, I got into my car and drove off to Amsterdam. My destination; Juniper Networks Amsterdam. The purpose of my visit; to sit the JNCIE-SP exam.

After studying for more than 300 hours, this was the day where I would get to prove my worth. 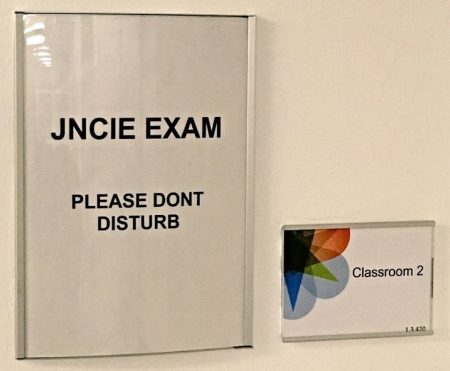 After the proctor explained the rules of the exam, I began reading through the assignments that were handed out to me. When I was done reading the documents, I logged in to the routers and familiarized myself with the environment.
During my first run through the exam, I did not permit myself to be stuck troubleshooting a single task or issue for more than 10 minutes. This was to make sure that I would finish all of the tasks on time.
After finishing the last question, I had another go at the more challenging questions, but not for too long this time either. Instead of staring at several tasks until the end of the exam, I wanted to make sure I had enough time for the most important part of the exam: the verification.
During this part of the exam, I reread all the questions and verified my solution to all of the questions at least twice. I verified my work in the most thorough way I knew. During this verification, I spotted some of my own fat fingering, saw some things I simply forgot to configure and most importantly, I discovered that some of the easy assignments were not so easy after all. There either was a catch, or the solution I initially configured was not fulfilling the requirements exactly.
During the exam, I experienced ups and downs. Some of the assignments were pretty easy, bolstering my confidence. However, this confidence was shattered when I encountered several of the more complicated task. Thorough and lengthy preparations pulled me through the moments of doubt I experienced.

All in all, sitting the exam until the proctor kicked me out was the best thing. I must have made at least 8 configuration corrections. without which I would have most surely failed the exam.
Looking back now, I have to say that the exam was fun. It was no easy exam. It was challenging, but fair. On my way home after completing the lab, it really felt like I got something of my chest. Even before knowing the outcome, I felt a sense of relief. After all this time, I finally did it and I did well. I figured that there was a chance that I had actually passed the exam.
Then the waiting started. The waiting brought doubts, slowly nibbling away my initial confidence.
People used to wait for several weeks to get the result of their lab attempt. I now fully understand how long this period of time must have felt for them. Luckily for me, the result came in after several days.
A pass!

To me personally, the whole JNCIE-SP was a journey, and what a journey it was! If forced me to go deep into a lot of service provider technologies. Constantly challenging myself with all sorts of networking topologies that combine everything I had learned up until that point. Going over the iNET ZERO content again and again, rereading the more complicated topics, building some ridiculous labs of my own. It was an absolute delight.
Apart from the fun I had, another reason for taking the journey was because I felt like I needed to prove something. I wanted to prove that I am ‘all in’. I wanted to prove that I could do it, go deep and get into the nitty gritty. To show that I am dedicated and willing to put in the time. To show that I am willing and not afraid to submit myself to a full day practical lab exam.

Netherlands based networking enthusiast and Juniper Networks ambassador. Has spent most of his career on the service-providers’ side of things. Known to lab up and write about whatever sparked his interest networking wise. Other than that, he is a father to his son, husband to his wife and he enjoys long dinners with friends.